Modern Spearhead is a rules systems that is designed for scenario based play. That is, players are encouraged to play scenarios where a certain tactical situation is outlined and players then allocate their resources to achieve the outcome. In the Modern Spearhead rule book three scenarios are outlined. This concept is very different to rule systems that are designed to produce evenly balanced games for competitions, often found for example in the Ancient period. 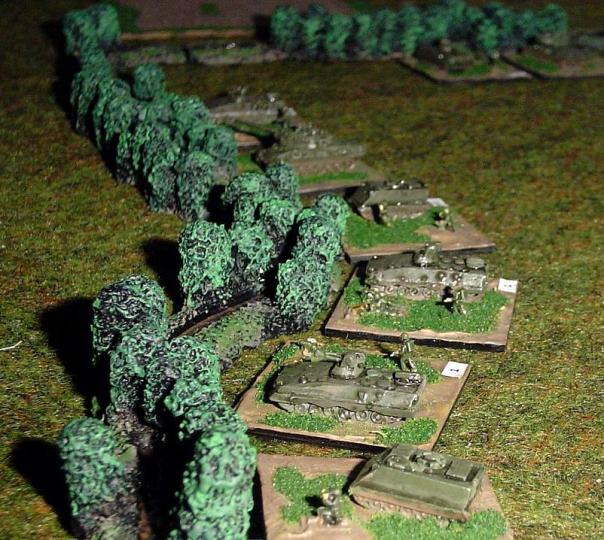 When I began playing Modern Spearhead I almost immediately found myself developing scenarios for my games. In part as I could not fall back on a published scenario books, as there were none for Modern Spearhead. In addition I did not have an experienced Modern Spearhead non-playing umpire, indeed I was often both organiser and one of the players.  As a result I found myself developing scenarios and playing. Frustratingly this meant that I had significant knowledge of the forces available and therefore there were few surprises for me.

A good scenario should provide challenges to the participants. It need not be perfectly balanced, as individual player ability will impact scenario balance, but both players should have a number of decisions to make where poor ones will result in defeat and good ones success. Therefore to provide an interesting game, and to model a military training exercise, a scenario should have a degree of balance. Further, just as actual commanders do not have a full understanding of the enemy composition, or its dispositions, neither should a wargamer. Further, wargame scenarios should have a basis on historical situations, much as military training operations do, or likely operational siuations. Not surprisingly I tried to model aspects of my study of historical engagements into the scenarios I was developing.

Interestingly, I soon realised that the scenarios I was developing were based on a formula. Indeed, if you look at the scenarios on this site you will see some of these formulas in action. As an example the defender is typically tasked with covering a number of objectives with a limited force. The attacker will have a number of possible avenues he can approach these objectives from. His forces will be limited, though he may have an ability to concentrate his forces. Victory conditions where defined in each of my scenarios, but often they too had a degree of similarity, another formula.

So why did I use a formula? Well firstly it was not a deliberate action on my part, but rather I was nervous I would put together a “poor” scenario and as a result provide an uninteresting game for my opponent. Of course I tried to introduce variety, as without this the tactical problems would become limited. But it was always a balancing act.

Once I realised I was following a formula it occurred to me that I may be able to formalise the process. If I could, I could perhaps build a scenario on the fly. As I explored this one of the interesting aspects was the increased variety I found in the scenarios produced. Indeed an early success was developing the battlefield, such as the one below. Rather than the battlefield being limited to my own “restrictive” mind I had two players working together to produce a different battlefield that had more variety than those I had produced myself. 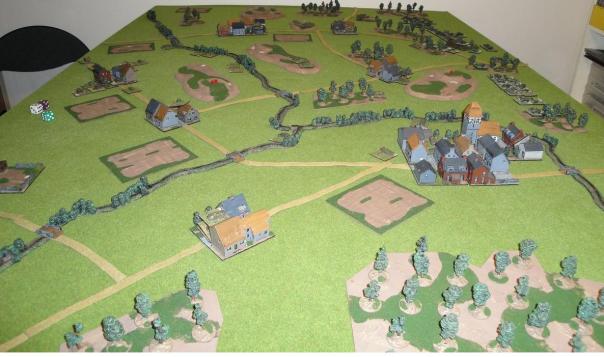 However, perhaps the most significant success was in the force structure variation. Players were no longer aware of the enemy force structure. Now both players may have an idea what their opponent was likely to have but they needed to consider other possible situations and how these may be countered. I felt I was on to something and continued to invest time in expanding expanding the formulas.

One of the formulas that I needed was a means of calculating the forces capabilities. For Modern Spearhead this meant the development of a points system. However, more importantly was the development of a points budget with which to provide attack and defence ratios. Some people seem very negative about points systems. To me they are just a tool to quantify some basic differences between different force capabilities. That said I was not interested in equal points based games. So while any  scenario designer makes these calculations, I mealy formalised them. So while points values feature in my formulas they are a small part of a much larger equation.

Putting all the formulas together has resulted in the Scenario Generation System which can be found on this site. If this system provides you with an interesting tactical situation on your wargames table then I will be immensely pleased. It certainly has provided many enjoyable games for my opponents and I.

The reorganisation of my Modern Spearhead website continues, slowly, and this evening I have finally sorted out and uploaded several Cold War scenarios.

The first scenarios are provided as a set and cover a series of actions between British and Soviet forces in the first few days of 1982. The scenarios are “Blunting the Bear”, “Engagement at Einbeck” and “Beyond Breaking”.

Each scenario involes a reinforced brigades, or in some cases two brigades, and can reasonably be played in an afternoon, or possibly evening, of gaming. The scenarios can be found here.