The deteriorating political situation in Europe during the summer of 1985 resulted in the forward deployment of elements of the French 7e Division Blindée (7th Armoured Division) to reinforce the Danish military. This reinforcement being itself a direct result of a number of Danish formations themselved having moved forward to forward deployment areas while Danish reserve formations had not yet fully mobilised. The French deployment, effectively a reinforced brigade, would result in one of the early clashes between French ground forces and the Soviets once hostilities began.

Soon after the Soviet forces crossed the West German frontier a series of naval landings occurred along the Baltic by Polish and Soviet Naval infantry. The landing by the 336 Naval Infantry Brigade would result in the dramatic clash between elements of the French 7e Division Blindée. As the naval infantry pushed inland French forces deployed to seize key terrain and conduct an aggressive couster-attack to halt the Soviet expansion of the bridgehead.

Limited intelligence of the immediate landing came from Danish covering forces, as well as reconnaissance flights by French Mirage jets. The staff of the 7e Division Blindée quickly developed a likely scenarios open to the Soviet commander. It was expected that a two naval infantry battalions would advance rapidly to seize two towns in the area of operations, the largest being Agestrup on the Soviet right and the smaller, Glattrup, in the Soviet centre. A third battalion would, it was expected, be directed towards a large ridge on the Soviet left. The Orders Group believed that a fourth battalion, possibly comprised of armour, would be held initially in reserve but would likely operate with this 3rd Battalion to advance against the French right and seize a key bridge on the Fensholt-Kildekrog road. Subsequent intelligence revealed this fourth battalion, of armour, was allocated out in support to the various naval infantry battalions.

To counter this scenario, and seize the initiative in the sector, elements of 7e Division Blindée were issued the following orders. Firstly, 35 RI (Regiment d’Infanterie) would advance on the French right secure a key road bridge and deploy in a blocking position to halt any Soviet expansion. Secondly, the main French effort would be on the French left where a daring operation was planned. Speed would be essential. The large town of Agestrup if seized by the enemy would be costly to retake. 5 RD (Regiment Dragons) would launch a rapid deep flank march that was to arrive on the enemy’s right flank. It was hoped this rapid attack would catch many of the Soviet forces in the open before they reached Agestrup. Simultaneously the 170 RI, mounted in VAB wheeled transports and lacking integral armoured support, would advance in support. One company would advance in road column directly towards Agestrup. To the left another company would advance across the rolling countryside. The third company, supported by specialised HOT ATGW vehicles and a divisional reconnaissance company, would secure a long ridge and deploy to overwatch positions. The attack would be supported by two self propelled F3 155mm battalions, retained in divisional support, as well as a TR-155 155mm towed artillery battalion dedicated to counter-battery fires. 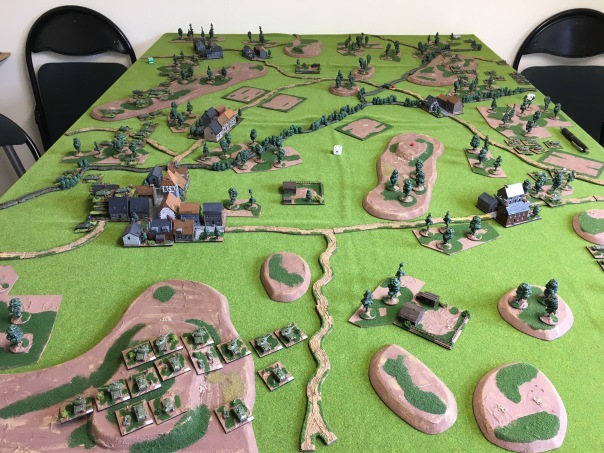 Above, the general situation with elements of the French 5 RB advancing on Agestrup, which is a five sector town in the left foreground. Soviet forces are advancing from the left with the town of Glattrup beyond Agestrup, and a long ridge top left. The French 170 RI is advancing from the right while 35 RI is just visible on the top right as it advances to its blocking position on the French right.

Below, another view of elements of 5 RB as they advance on Agestrup. The Soviet battalion here scattered on seeing the advancing French AMX-30 tanks and supporting mechanised infantry in AMX-10Ps. While many Soviet BTRs were able to reach the eastern sectors, and others deployed in the woods, the Soviet Battalion HQ was destroyed. 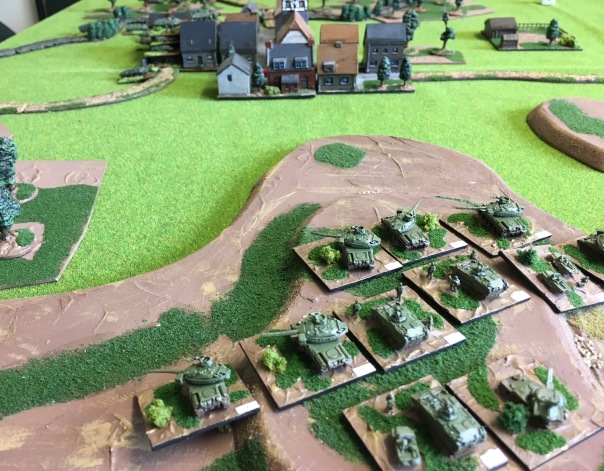 Below, a company of from 170 Regiment d’Infanterie, mounted in VAB APCs advance rapidly by road towards Agestrup seen here passing through a small Danish village. To allow this rapid move the command arrow for the regiment was drawn directly down the road. 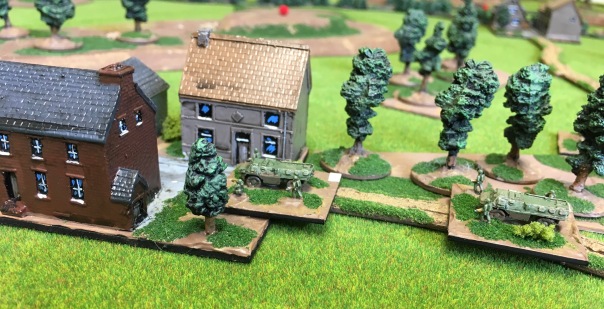 As the VAB equipped 170 Regiment d’Infanterie raced towards Agestrup the tanks of 5 RB started to manoeuvre to the flank and behind Agestrup where the tanks would eventually engage the rear of the Soviet forces. Desperate to halt the advance of the French armour Soviet Forward Observers, operating in support of the naval infantry, directed a massive Mutiple Rocket Launchers strike, below.

Fortunately casualties from the strike were limited, though several platoons were suppressed. The massive fire signature of the MRLs allowed French counter-battery teams to locate the MRLs. French artillery now targeted and destroyed the 140mm MRLs. This was the first of three Soviet MRL systems that were engaged in a series of effective French counter-battery fires.

Below, elements of the 35 Regiment d’Infanterie advance to secure a bridge on the French right. The regiment comprised three companies of mechanised infantry and one of AMX-30s. An AMX-13 DCA is visible on the right foreground and provided local AA protection. A Roland SAM system, providing expanded protection for the battle area is to the right. 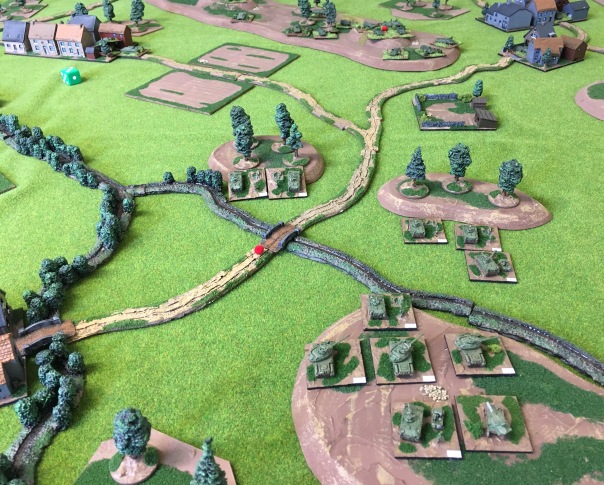 Both French and Soviet forces conducted a series of electronic warfare radar location missions to identify and then target enemy radar systems as they shaped the battlefield for later air strikes. Long range Soviet SAMs were located but due to their range could not be targeted. However, local radar controlled gun systems were located, targeted and silenced.

The tracked Roland SAM system was suppressed by these massive strikes, yet surprisingly the Roland systems soon recovered and relocated. Now, French artillery located this second MRL and silenced it.

However, the Soviets now had a window and with the Roland temporarily inactive a stream of Soviet SU-17s swept in to engage 5 RB near Agestrup. 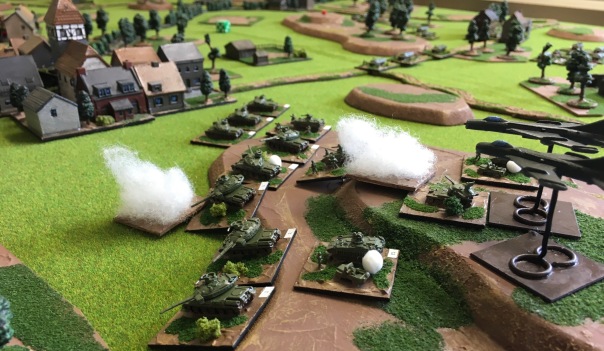 Above, SU-17s engage AMX-13 DCA self-propelled AA gun systems, mechanised infantry and tanks using smart bombs. The use of these stand off weapons limited the ability of the DCA to disrupt the air attacks, especially with the Roland suppressed. While casualties from the air strikes were heavy, the regiment remained undeterred and 5 DB continued it’s advance.

Both combatants also conducted a series of radio jamming EW missions in an attempt to degrade and disrupt enemy communications. 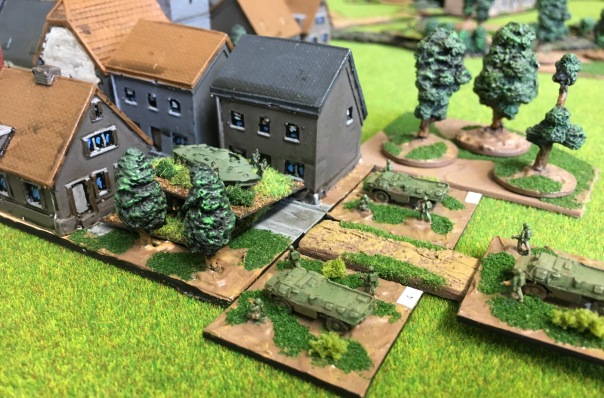 The rapidly advancing infantry of the 170 RI looked likely to gain a foothold in Agestrup. However, the Soviet Naval Infantry also moved quickly. Just as the advanced VAB company arrived at Agestrup the final sector of the town was garrisoned by the Soviets, as can be seen above. All five sectors were now under Soviet control. Rather than assault the town 170 RI  would now switch to supporting the French main effort, a drive against the Soviet rear. Agestrup would be bypassed. 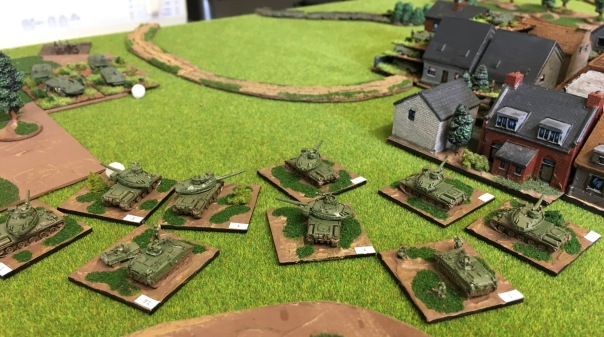 Above, AMX-30s of the 5 RB engage Soviet ATGWs. The support fires by self-propelled F3 guns were ineffective and the Soviets ATGWs were eventually overcome by tank fire.

Indirect fires by Soviet self-propelled 122mm guns were generally ineffective. However, after location the Soviet weapons were also subjected by heavy counter-battery fires by two French artillery battalions resulting in some 50% casualties, forcing the remaining Soviet guns to relocate.

Below, as the French armour pushed deeper some companies targeted towed Soviet ZSU-23 artillery and mortars while others engaged Soviet infantry and PT-76s. French armour and infantry would soon move into the woods catching a company of PT-76s redeploying.

Facing a now desperate situation Soviet commanders requested fixed wing air-support. Again Soviet EW teams located French Roland SAM which were immediately targeted by the third MRL battalion. Again the MRL failed to destroy the French SAM, and were themselves located and hit by further massive French counter-battery fires. However, for critical moments, the suppressed Roland were off-line and during that time a flight of Yak-38 aircraft conducted an attack using ICM.

Despite the air strike French resolve stiffened. Yet again the French armour moved forward. However, the advance would be short lived as Soviet naval Helix attack helicopters appeared over the Soviet rear. With no local AA systems operational the French armour was all but defenceless against this new threat. 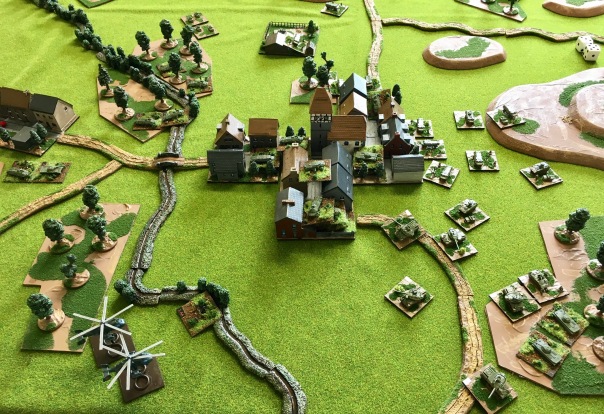 Above and below the Helix gunships, allocated to tank busting, engage the AMX -30s of 5 RB. Visible on the left elements of a second naval infantry battalion can be seen forming a second defensive line while in the top left French reconnaissance teams fall back from Soviet positions.

Unable to continue the advance the 5 RB was forced to retreat. Now, and effectively unsupported, the advanced VAB companies of 170 RI broke-off their own advance, falling back to defensive blocking positions.

The Soviet Naval Infantry Regiment had secured its bridgehead. The French commander, accepting defeat, took some satisfaction that with the destruction of so many Soviet artillery systems. Two Soviet battalions were eliminated and two others had suffered 50% casualties. The Soviet 336th Naval Infantry Brigade would be unable to conduct offensive operations for some time.

This entertaining Mutual Encounter scenario was developed using the Scenario Generation System. Both forces comprised a basic 850 points. The French forces were however reinforced by an Option B, with a victory point penalty. Unfortunately the French fixed wing aircraft, that comprised much of this reinforcement option, were not engaged. The final result was a significant Soviet victory. 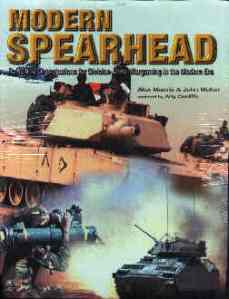