Three days had passed since the invasion began. During these desperate days both NATO and WARPAC formations had suffered heavy losses and both were committing reserve formations, or in the case of the Soviets, follow-on formations. Generalmajor Hans-Henning von Sandrart, commander of 11th Panzer Grenadier Division, had allocated one of his brigades, the 32nd Panzergrenadier Brigade, to hold the left flank of his divisional room. Opposite, his Soviet counterparts were committing elements of a reserve Motor Rifle Division, moved west prior to the offensive. Now, elements of this fresh division were advancing in a hasty attack on the West Germans.

The brigade’s operational room was considerable, especially for an understrenth formation. Divisional intelligence expected the initial Soviet formations would comprise two Motor Rifle Regiments supported by artillery and fixed wing aircraft operating in close support. Based on this scenario, and with limited resources, Esebeck opted to deploy two battalions forward on a key ridge with a company of each battalion holding flank positions.

Above, the main ridge flanked by a town on the left and a village on the right.

The brigade’s third battalion, the 311th, would hold the brigade’s left but would deploy considerably further back. Likely routes of advance were covered and each battalion had local reserves. However, should the enemy advance along an unexpected route, Esebeck determined his small battalions would operate in a flexible defence. Following standard doctrine each would be prepared to reposition to reinforce another.

Below, the general situation with the Soviets entering from the left. The German left flank is in the right foreground.

Soviet forces were soon on the move and advanced German forces reported several Soviet tanks battalions supported by BMPs, along with BTR mounted infantry moving against the 32nd Brigade’s left flank. Indeed, as reports came in from advance positions it was soon clear that an entire Soviet Tank Regiment, comprising T-55s, T-62s and BMPs, was advancing at speed. This regiment was supported by significant portions of a BTR Regiment. It seemed the intelligence officers were mistaken in their assessment!

Below, the Soviets advance with a tank regiment in the foreground. The BTR battalions are just visible in the distance and are themselves supported by tanks and ATGW systems and self-propelled artillery. 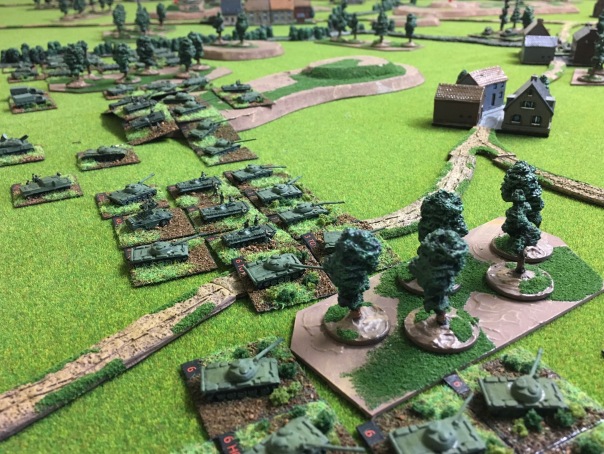 Below, elements of the 311th Panzergrenadier Battalion prepare to engage the Soviets. The small village of Gerbertshofen can be seen on the left, complete with a garrison of a single panzergrenadier platoon.

The advancing Soviets Motor Rifle battalions were first to be engaged when Panzergrenadiers in Gerbertshofen requestedfire support from the brigade’s 155mm artillery. A series of accurate fires destroyed a company of advancing infantry. This was soon supplemented by direct fire from supporting Leopards. 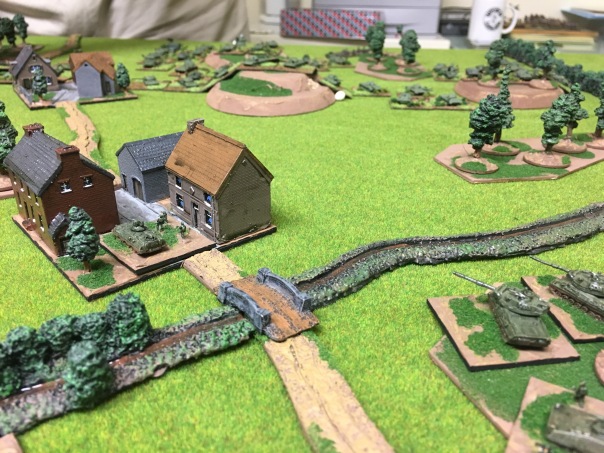 Below, the Soviet attack presses forward. Gerbertshofen has now been reinforced in an attempt to prevent a direct attack. Casualties on the German Panzers are now mounting as the Soviet armour engages. While German artillery fires continue to cause heavy casualties on Soviet infantry. However, without a dedicated artillery observer the fires are not always concentrated falling on three seperate Soviet battalions.

While the Soviet attack clashed with Panzergrenadiers and Leopards around Gerbertshofen, the battalion’s left flank began to fall back towards higher ground in an effort to further protect the battalion’s flank. Below, a Marder equipped company can be seen in its revised position. On the hill Gepard AA remain vigilant. The red marker denotes a game objective.

Above, 312th Panzergrenadier Battalion conducts its second phase move. 313th Battalion, partly visible in the top right, will next reposition on the ridge. German tactical flexibility here was extremely important and each order change was successful despite Soviet radio jamming missions. On the extreme left elements of a Soviet BTR battalion can be seen deployed in a covering position to protect the Soviet left against a flank attack. 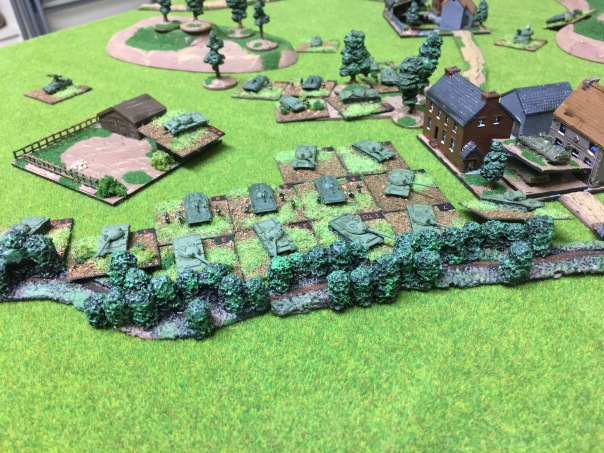 Above, Soviet armour prepares to advance over the a stream, with the intent of overwhelming the 311th Battalion and breaking into the German rear. The village of Gerbertshofen can be seen and is still in German hands. The Soviet plan required this village to be taken allowing supplies to be bought up for the exploiting Soviet tanks.

Below, another Soviet tank battalion moves forward. A number of Soviet battalions had reached the end of their command arrows. Now, German radio jamming missions added to the Soviet command problems. At this point the 311th Panzergrenadier Battalion was almost at breaking point. A concerted Soviet effort in fading light would have been devastating. 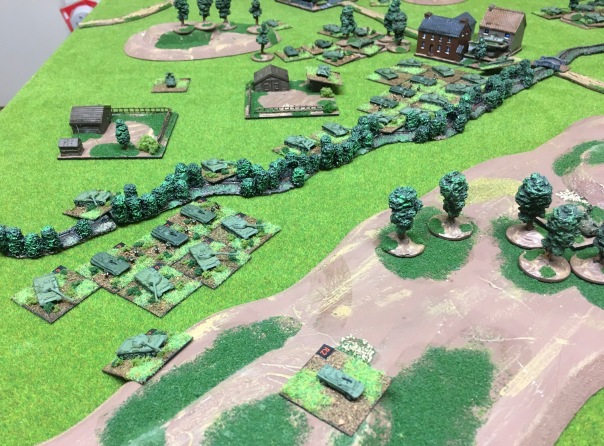 However, 312th Battalion had itself now moved on to the high ground to the rear of 311th Battalion. Once completed the Brigade’s position was stabilising, though it remained fragile.

At this point, with light fading, the Soviet attack began to slow. Clearly, the Soviet commander was in a strong position and the use of massed armour had clearly pressed the German defence to breaking. The 311th Panzergrenadier Battalion was significantly outnumbered and only the flexibility of German forces to reposition allowed the position to be maintained. Soviet artillery was both limited and ineffective, in stark contrast to German artillery fires. However, the Leopards of 311th Panzergrenadier Battalion, available only in company strength, stood no chance against the concentrated deployment of so many Soviet tanks. Achtung Panzer indeed!