The following covers a recent Soviet hasty attack on a British defensive sector set in 1982 using a scenario developed with the Scenario Generation System. Both the British and Soviets opted for an Option A reinforcement. I’ve provided a little additional detail around the Soviet planning as background. The Soviets were commanded by Robin and I, while Andrew commanded the British.

Various thoughts ran through Major General Viktor Golubev’s mind as the divisional operations officer completed the orders group. Had he considered the enemy deployments sufficiently? The reconnaissance reports indicated he would be engaged against a British brigade comprising tank and mechanised infantry. While the maps indicated the terrain on the enemy right was more open indications of ridge lines and British armour heavy formations were of concern. Was his decision weight his attack against the British left correct? Would the attack through a large wood against the high ground that dominated the forward centre of the British position be successful? Certainly he was concentrating his effort as the attack would initially utilise two mechanised battalions, soon rising to three. Would the battalions have sufficient strength to press on to the secondary objectives where a second British mechanised battalion was located. But what of the British tanks? His intelligence officer indicated the British armour would remain in place, but would it? There were so many variables to consider. Then his mind was drawn his two regimental commanders tasked with the divisions immediate objectives. He wondered if each of his commanders were up to their respective tasks or if the would flinch at the critical moment? Would they make sufficient use of the resources allocated? Only time would tell…

By 3pm the advanced elements of the attack were committed. Elements from two Motor Rifle Regiments were allocated to the phased assault with each regiment allocating two reinforced battalions to the advance. On the left the BMP equipped regiment advanced in two groups. The first was tasked with advancing and clearing a large wood and small village before swinging left to secure high ground. Reconnaissance suggested the wood line would be held by infantry, yet the threat of British counter battery fires precluded pre-planned fires. Instead, it would be a silent attack with the artillery on-call. To the left of the battalion a second BMP battalion was held in reserve to provide flank protection and support for follow-on operations.

To the right of the BMP Regiment elements of a BTR Motor Rifle Regiment advanced. The 1st BTR Battalion was to advance along a route that ran parallel to the BMP battalion so it would strike the flank of the woods while potentially clearing a key village on the battalions right flank. In support a further BTR battalion would advance on flanking movement to the right of the village. Delays for this battalion were expected due to the approach march required. However, it would provide additional elements which would ensure the village, the other initial objective, was secured. On the extreme right a divisional reconnaissance company was tasked with deep reconnaissance of secondary objectives. The BTR Regiment would then press deeper into the British flank securing the secondary objective while the BMP Regiment would halt the expected British armoured counter-attack. In support of the four reinforced battalions were each regiment’s 122mm D-30, a divisional 152mm battalion as well as two battalions of 203mm towed guns for deep counter-battery fires. The SAM systems were prepared and included Gaskin, Gecko and Guideline and supplemented by ZSU and SA-7.

Below, the 1st BMP Battalion advances towards its primary objective, the small hill that dominates the village on the right. The BMPs, supported by a company of T-64B tanks soon came under fire by Abbots and light mortar fire. Swift Soviet counter-battery fires forced the Abbots to relocate. While Soviet radio jamming disrupted many new requests for support fires. 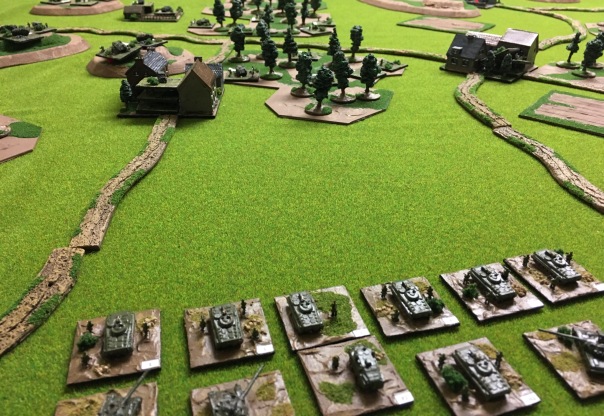 To the right of the 1st BMP Battalion the 1st BTR Battalion advances, shown below. Supported by T-62 tanks this battalion was soon engaged by dismounted Milan teams, just visible in the wood line, of British 2 Para. Again British artillery fires, from a second artillery battalion, supported the defence. These fires caused increasing casualties among the Soviet forces. However, again the British self-propelled guns were hit by Soviet counter-battery fires. Suffering casualties the Abbots were forced to relocate. The village on the centre right though an objective was to be bypassed initially while the battalion concentrated on the main attack. Eventually 2 Para would fall back leaving a now isolated company to hold this village. 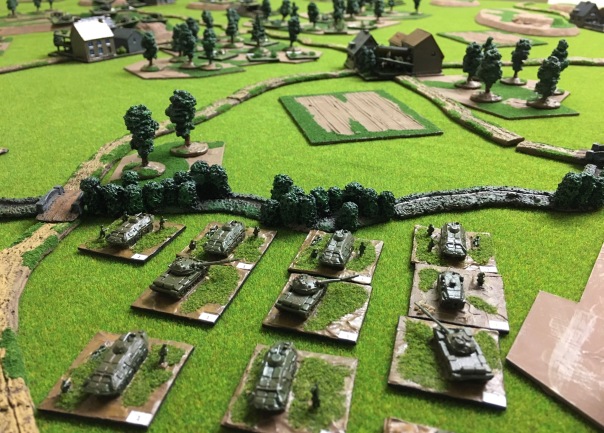 The artillery fires were not all in the Soviet favour. Divisional level D-20 152mm guns attempted to neutralise the Milan teams. These were almost immediately located and hit by British counter-battery M110. The entire Soviet battalion was eliminated. The M110 were however located by Soviet M-1955 towed guns. Suffering casualties they too were forced to relocate.

Below, another view of the advancing 1st BTR Battalion. The situation was critical and with casualties mounting the political officer at Regimental HQ was “encouraging” the Regimental Commander to press forward.

Below, the Soviet 1st BMP Battalion presses its advance towards the woods while a platoon of T-64B tanks and ZSU-23-4 support the BTR advance by engaging the Milan. The BMP Regimental D-30 towed 122mm guns also conducted artillery fires against these Milan. After firing for a period the towed guns were moved to a secondary location to avoid British counter-battery fires.

Behind the village elements of a British mechanised battalion can be seen on high ground and moving into the wood in a desperate effort to support the British paratroops. The forward deployment of this British battalion was unexpected. The BMP battalion’s towed 120mm mortars were particularly active supporting this sector and caused considerable disruption to the British infantry. The 120mm mortars were now themselves subjected to a massive counter-battery fire by M110, with devastating results.

Meanwhile, on the British right, the unengaged armour heavy battalion had been ordered to move from its defensive position in a counter-attack. Above, a portion of the battalion deployed before the Soviet attack, mechanised infantry were deployed in the town behind the village in the foreground. The ridge provided a strong blocking position and any attack here by Soviet formations would have ended in disaster, despite the small number of British tanks.

Below, the Chieftains on the move. The small two contour hill on the right is the BMP battalion initial objective. The British armour heavy battalion is now operating without mechanised infantry and is about to pass through elements of a seperate mechanised infantry battalion and attack the 1st BMP Battalion left flank. A difficult task which impacts greatly a formations ability to engage enemy.

Below, the British armour moves over a ridge line and advanced elements begin to engage the 1st BMP Battalion at 1500m. Additional dedicated ATGW systems, concentrated T-64Bs or helicopters would have been extremely useful at this point!

Instead with rapidly fading daylight the Soviet reserve battalion was committed. It now advanced against the exposed British right flank.

Above, British Scorpions, forward of the Chieftains, engage the rapidly advancing BMPs while T-64Bs begin to engage Cheiftains. In the centre right BMP SA-7 teams deploy to high ground. The Soviet commander was continually concerned about British Lynx or fixed wing air attacks, which never appeared!

Unfortunately, we had to call time at this point with the game very much in the balance. The engagement had been excellent and highlighted many of the strengths of Modern Spearhead, when combined with a well balanced scenario. With neither the Soviets or the British having a complete understanding of the enemy force suspense was maintained throughout. The well coordinated British defence had proven a difficult task to penetrate. Yet supporting attacks and maintaining a focus of effort had rewarded the Soviets, though their objectives were yet to be secured. Artillery fire had been heavy and both protagonists had exhausted their main counter-battery assets. The flank marching Soviet BTR battalion having arrived late was now pressing forward. Supported by D-30 122mm artillery this, along with the other D-30 artillery battalion of the BMP Regiment, would now provide much needed artillery support. EW missions, in the form of Radio Jamming, had proven useful to the Soviets. The threat of British air strikes had failed to materialise, though the threat haunted the mind of one Soviet commander! Meanwhile the other Soviet Regimental commander lamented the lack of Soviet helicopters or fixed wing air support. He argued they would have been very useful providing critical support against the advancing British armour. He was correct, perhaps next time…

4 thoughts on “Drive on Mantinghausen”